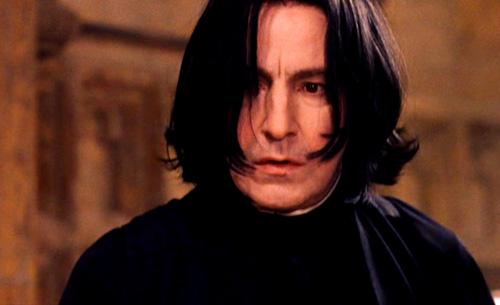 “I da pappi”, is a quote from the comedy movie “Life” starring Martin Lawrence and Eddie Murphy. In the movie the inmates at their prison all say this to protect a mentally ill fellow convict that impregnates the wardens white daughter. It’s a very funny movie, you should watch it if you haven’t seen it. But, that’s not what I am about to discuss and question you about. In this hypothesis “I be da pappi” would be what Professor Severus Snape says in regards to Harry Potter. That’s right, it is my belief that Snape was really Harry’s biological father.

I am not the only person in this universe that has this theory. It was probably the 100th time I had finished reading the Harry Potter series and watching the movies last year, when suddenly I had an epiphany. It was after seeing that beautifully heart felt scene at the end of HP and the Deathly Hallows Part 2, that I thought this had to be bigger than his love for Lily Potter. You’re telling me that the love of his life dies and 17 years later he is risking his life as a double agent because Harry had her eyes….please. This man was secretly protecting he son. I feel like this would also explain his extreme hatred of James Potter and why he went crazy every time Harry tried to believe his father was such a wonderful person. Yes the books and movie explained that he hated James because he was a bully as a child. This doesn’t really make sense, though. I mean people trusted Snape after being a death eater, Dumbledore trusted this whole secret mission to an Ex-death eater, but Snape can’t forgive his childhood bully. No, he was salty because James Potter got his woman and his child. I feel like Lily was stuck between a rock and a hard place and loved them both. So in order to save face she went along with Harry being James’ son rather than revealing that she had an affair with Snape. For all she knew he was a devoted Death Eater, so as a person of non-magic heritage, their love was taboo. James, at this point, had grown out of his immaturity and had become an honorable man. It just made sense for them to keep this under wraps. Maybe James even knew and went along with it provided he and Lily stayed together.

There was another person that made it all come together for me, and that was Lily’s sister Petunia. Petunia was disgusted with the fact that her sister was a wizard and was killed. But, once again it seemed a little extreme. What could add salt to her wound? Her sister falling in love with and making a baby with the very person that took her beloved sister away from her, Snape. Snape got in between them and began to tell Lily about the wizarding world. When Lily got her letter to Hogwarts Petunia was shut out, and Snape was let in. Harry was a constant reminder that her sister was special and she was not. This also explains why the Dursley’s went out of their way to always keep Harry’s spirits down and put Dudley on a pedestal.

There’s also Harry and James relationship as a whole. Although he didn’t have much time with either of his parents before Voldemort had his way with them, there was always lots of emphasis put on Lily’s love and sacrifice.  James died to protect them both before Voldemort got into the room with Harry and Lily, but everyone kind of dismisses that. Its always his mothers voice, face, and screams that he envisions. It is also his mother that talks to him at the grave yard in the Fourth movie and in the forest in the final. His dad is always their in his dreams and memories, but kind of in the background. It is like his dad memory is not as significant. It might be because people always put the “mother’s love” above all else, but it could also tie into my theory.

So what exactly disproves this theory? The only thing that does is what people always said about Harry’s appearance. They always said that he looked just like his father (presumed to be James) except for his mother’s eyes. My argument to that is, people thought he looked like James because he was supposed to. They say if you live with person long enough you start to look like them, although Harry didn’t live with James very long. The mind sees what it wants to see. How many children go their whole lives thinking one person is their father and never question it? They don’t have a reason to so they see features of that person in themselves. There could have also been a spell or potion that was created by Snape and/or Lily to make Harry favor James strongly so that no one would question his paternity.

Is my evidence the soundest? Absolutely not. But I think it would make for an interesting spin off. Let’s make Harry Potter into the Jerry Springer Show. It was what I believed to be an interesting theory, which from my research only others agreed with. Maybe it was just my effort to make Harry Potter like the crazy world we live in now, full of drama. In my opinion “Snape is da pappi” But I’m just one person, what do YOU think?