All over social media there have been post and memes about how horrible 2016 has been. As I prepare for a new year of bettering myself, I thought it would be beneficial to focus on the positivity of 2016. New Year’s Eve is the perfect opportunity to fill in gaps and review some of the HEALTHY.NERDY.NAPPY.MOMMY awesomeness.

Being that this is pretty much National Diet Month,  I was busy trying different products and recipes to accumulate myself to my new lifestyle. I did a clean eating and yoga challenge, and we started officially trying to potty train my 18 month old son. Now I know it was too early, and we didn’t stick to it well. But it gave me a good chance to get some bare bottom photos as blackmail when he gets older.

For Valentine’s Day my husband and I enjoyed a movie date to see “Deadpool”. It was a breath of fresh air to see this rated “R”, as a true “Deadpool” movie would have to be. We also enjoyed playing some “Naruto Shippuden: Ultimate Ninja Storm 4”. My son transitioned from stay at home dad care, to daycare. It was hard on us all, some of this I later shared in “Peez, Ana” . But it was also for the best.

March opened with Spirit Week at my school, and as the Student Council adviser I had to go all out with a X-men’s Storm costume. It wasn’t the best (couldn’t find the right wig), but good enough for the crowd I was serving. My students were calling me “Thunder Girl”, they didn’t even know my character’s name. It was my son’s 2nd birthday on the 14th so we planned a “Cloudy with a Chance of Meatballs” party, complete with meatball sub buffet. As he was a big boy now he also got a small “Jake the Pirate” party with cupcakes and juice at daycare. For the 3rd birthday we just might leave it at treats at daycare and family dinner.

This month was the grand debut of HEALTHY.NAPPY.NERDY.MOMMY! During Spring Break we did indoor camping in our little apartment living room. Complete with a fort, s’mores, kababs, and baked beans.It was also my husband’s birthday which and our dating anniversary that marked 9 wonderful years being together. We celebrated with a family party at his cousin’s, complete with Baskin Robin ice cream cake, a game stop gift card, his favorite Snickers &  Bacon- Cheddar gourmet popcorn, and a gamer screen t-shirt. His celebrations tend to be more family inclusive while mine are typically dates with just the 2 of us giving me a mommy break.

We celebrated Mother’s Day with yet another movie date highlighted in (Marvel)ous Mother’s Day. I cannot express how much I enjoyed “Captain America: Civil War”. This month I officially became a “Flexi-Vegan” and I was experimenting with vegan and allergen free recipes.

This is one of my favorite months because it marks the end of the school year and time for a short break. I always teach summer school, but in June I get a couple weeks off before I have to crack back at it. We enjoyed a small beach trip with my parents. It was also the month a tried my first Cross Fit class, and started watching the original “Dragon Ball” series for the first time. 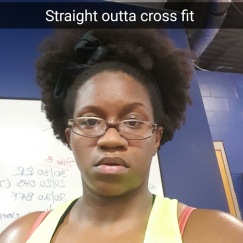 The biggest thing that happened in July was the introduction of Pokemon Go. I was so excited about this game, but that excitement quickly fizzled and I don’t even have the app downloaded on my phone anymore, but they were good times while they lasted. I’m interested to see what the craze will be this year. July was capped by seeing Kakashi’s face in the latest episode of “Naturo: Shippuden”

I don’t know which is a bigger deal my wedding anniversary or Otakon. I don’t think my husband would even be mad at it. I talked about our excitement for Otakon in 6 Anticipated Events for a Nerdy Mom and fully anticipated doing a full post on it, but that never happened. So this is your mini overview of it. It was bitter sweet, as this was the last year it would be in Baltimore, MD. But I am excited for the new location. Otakon 2017 WILL have a post, maybe even an entire page dedicated to its greatness. In preparation for this trip and the start of a new school year, I got crochets for the first time. Its a great protective style, and I’ll never set for 10 hours getting individual sengalese twist or box braids on this thick head of hair again. Oh, yeah my son came back from staying with my parents while we were at Otakon potty trained! He still needed the pull up for night and doesn’t poop until then.

I entertained the ideas of starting a garden. I starting some romaine, but I didn’t follow through. For this spring though, I plan on starting both an indoor and patio garden for herbs, fruits, and veggies. Look forward to pictures, how to’s, and testimonials in the near future. I also developed an addiction to the online make up line Colourpop. I’d never been a make up girl before, but I found myself needing something to step it up a notch. Lipstick for me is the easy answer (I love Matte). Just the lipstick, some eyeliner, mascara, and maybe BB cream and I’m good to go. From my first purchase in August to now, all of my profile pictures feature me in one of their shades.

In the last week of October I went on my first cruise! I had so much fun and relaxed with friends and family. I became known as “the girl that ate all the weird food” because at dinner I always tried the most exotic thing on the menu. Why would I pay all that money for something I can eat any day? We enjoyed the dinners and events on the ship as well as the beach and sights of Nassau, Bahamas. I might save big for a Disney cruise in the future, I’ve heard, while expensive, they are the best. Disney should do a line dedicated to Marvel or Star Wars since they are taking over everything. Universal Studios could take on a Harry Potter cruise as well.

In November my son woke up early in the morning vomiting several times within two weeks of each other. I took him to the doctor the second time, and they said it was probably to different viruses. After leaving the doctor I started thinking he might have food allergies like me. Both times he never had a fever or acted sick, it was just vomit or diarrhea. It could be allergies or an intolerance at the least. I took him off dairy for a week, but didn’t really notice a change. After he returned to his normal diet he didn’t have anymore stomach issues, so maybe it was just the stomach bug like the doctor said. We of course enjoyed Thanksgiving with family. I took an allergy pill, ate what I wanted, and hoped I wouldn’t end up in the ER with anaphylaxis.

The holidays are busy for everyone. We began this month by putting up our Marvel Christmas tree. I’d seen some superhero, Harry Potter, and Star War variations. Ours was simple we just added some superhero masks we had from our wedding photo booth along with our normal red and gold decorations. My birthday was the 17th. We had a quiet, childless, evening at home watching some Luke Cage on Netflix, with carry out sushi, and wine. I found out two days after my birthday that I won “Teacher of the Year” at my school. I had a great Christmas as it was the first our son was really excited and understood what was going on.  We later celebrated my birthday  and the life of Carrie Fisher by finally watching “Star Wars: Rogue One” and I realized first hand that The Force is with Me. My husband and I’s catch phrase has become “the rebellion was built on Hope.”

I hope you’ve enjoyed my year in a glimpse. I look forward to sharing more with you in 2017, Happy New Year’s to you and yours.