Skip to content
HomeAre Orcs the Blacks of Middle Earth?

I have mentioned the influence of my race a few times. It goes without saying as I am discussing various aspects of natural hair care. In the world of geekery I am interested in African American Sci-Fi and Fantasy characters. Because African Americans have been under represented in va 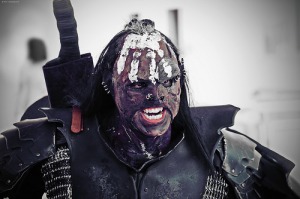 rious forms of entertainment, since I was a child I find myself yearning for characters that “look like me”.  So my first time watching a “Lord of the Rings” film I found myself asking “where are the black people?”

I’ve read “The Hobbit” and the “Lord of the Rings” books. And although descriptions of characters are given their race, as far as color, is not. But I believe European characteristics are the “default” of what people imagine in their minds if it is not specified. Much like the outrage of Hermione being cast as black in “The Cursed Child” to which author JK Rowling responded on twitter saying “Canon: brown eyes, frizzy hair and very clever. White skin was never specified. Rowling loves black Hermione”. The film makers who bring the movie to life create their own interpretation of the world the writers created. So in the Middle Earth created by Peter Jackson, the only people with dark complexion were the Orcs/Goblins.

In the Middle Earth of “The Hobbit” and “Lord of the Rings” there are a few races which include Elves, Men, Dwarfs, and Orcs/Goblins. I’m not even sure if I sure include Wizards as a race, since there a few of them one serve as guardians. Technically other than “Man” the other races of Middle Earth aren’t “men” (if you get what I’m trying to say) but nonetheless they were chosen to be cast as Whites in the films. Then you have the Orcs. Their skin color varies greatly in the films. Some appear the palest of  white like Azog the Defiler.  While others are yellow, pinkish, red, brown, and black. Some of their hair is matted in a way that reminds me of dread locks, I’m thinking primarily of Lurtz, the Uruk-Hai scout leader. The Orcs appearance is the most distorted of all the Middle Earth creatures. I’d imagine that is to reflect what these creatures have endured (sound familiar).

Saruman describes the orcs as “elves taken by the dark powers, tortured, and mutilated. A ruined and terrible form of life” he goes on to say “Now, perfected, my fighting Uruk-Hai.” These creatures are typically shown controlled and following orders of either Sauron or Saruman. Saruman “the white”, marks his soldiers with his white hand insignia. They are used for their physical strength, and depicted as unintelligent, savage creatures. They will turn against each other if it suites the individuals needs and follow orders of their leader with little question. They are largely regarded as villains in these works, although have little to gain from their “sides” victory other than remaining in servitude. Obviously, works in particular locations and time settings would not accurately have blacks, but why not if it is fantasy? Why could there not have been black Elves, Men, Dwarfs, or Wizards? Orcs are the only character that seemed to physically fit the bill. Then when I looked closer, I thought “maybe it wasn’t coincidence?” It is believed that Tolkein wrote these books to reflect what he saw during World War I. Could have also been showing his thoughts of the treatment of blacks during that time and over the course of history?

My intention is not to race bate or offend. I am merely stating my observations.  I have read “The Hobbit” and “Lord of the Rings” as well as seen the films, although I have not read “The Silmarillion” (future gift idea). These stories may close some gaps and give me more answers proving or disproving my hypothesis. Have anyone else had similar theories?

29 thoughts on “Are Orcs the Blacks of Middle Earth?”